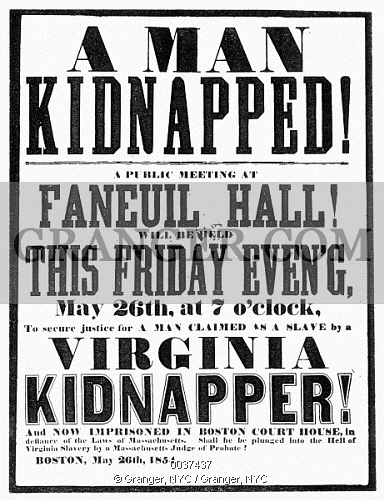 The fascinating story of Anthony Burns, runaway slave who was championed by Massachusetts abolitionists, has parallels with today’s immigration reform debate. Sanctuary cities and states refuse to help enforce federal laws they disagree with. Abolitionists did the same. With some differences.

Burns, born a  Virginia slave in 1834, escaped in 1853, in the tense years just before the Civil War. He fled to Boston and became a clerk. He was captured a year later by his owner and bounty hunters. While Burns was held in a local jail, a hostile mob of anti-slavery protesters learned about his arrest.

Abolitionist Wendell Phillips declared that “Anthony Burns has no master but God.” A group vowed to rescue him. (Bostonians had a history of resisting government with such pleasantries as scalding tar.) The mob stormed the jail with a battering ram to free Burns. Two deputies were killed but the attack was unsuccessful.

The fate of Anthony Burns

For Burns’ trial, the court became a fortress. President Franklin Pierce spent $100,000 to secure the facilities with artillery and militia. Burns was convicted of being a slave, everything legal to a “t.” As Burns was taken away, 50,000 Bostonians lined the streets in protest.

Burns was returned to Virginia, but later learned that his minister had raised $1300 to buy him from his master, who began negotiating during the trial. Then Burns went to Oberlin College, became a minister, and died of tuberculosis in Canada.

What’s the core issue? States’ rights, part of the debate between Thomas Jefferson and Alexander Hamilton. By enacting “personal liberty laws,” Massachusetts sought to, nullify, or at least subvert, Congress’ will. Southerners reacted angrily  and correctly pointed out that the Constitution in Article IV requires the return of escaped slaves.  The Fugitive Slave Act criminalized aiding runaways. Massachusetts defied the law.

Today, states’ rights are being invoked by not conservatives, but liberals. Sanctuaries are places where local police do not report undocumented people to immigration authorities for minor offenses. Why not?

Either on philosophical or pragmatic grounds.

Philosophically, people may invoke a “higher law,” sanctuary to the desperate stranger. In Boston luminaries such as Henry David Thoreau and Ralph Waldo Emerson insisted a higher law than the Constitution existed. Anthony Burns himself was reluctant to fight in court, fearing retaliation. He was persuaded to by abolitionists.

Pragmatically,  if undocumented people fear deportation, they cannot cooperate with local police. Imagine a hit and run accident at 2 am witnessed by such a person. Can she report what she saw, or testify in court? No on both counts. So the local crime never gets solved. Police in many cities beg for free communication with the undocumented community, promising no federal involvement, if people will just speak up.  Under the 10th Amendment, states are empowered to do what’s not in the Constitution, such as policing, and that is the grounds for essentially asking federal immigration law to stay out of local police enforcement.

You may say the comparison between a runaway slave and an illegal immigrant is inapt. We can all agree that slavery was a moral wrong and the laws enforcing it unjust. They should never have existed. But immigration law is perfectly constitutional and basic to our nation’s survival.

We live under the rule of law 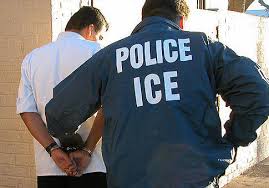 The Trump administration alleges that there are “rapists and murderers” streaming over the Mexican border. He claims that many undocumented are habitual criminals, though there is no evidence they are any more violent than the general population.

President Obama deported more undocumented than any previous president, and President Trump is on course to up the ante.

Trump threatened to withhold federal transportation funds from sanctuary cities. He has stepped up the enforcement of immigration laws and expanded the categories of legal infractions subject to deportation. Even an unproven charge can provoke deportation proceedings. Immigrant communities are understandably frightened.

Immigration reform may finally be tackled

At the History Dr, we don’t pretend to know the answers. But it’s important that everyone seek them. We do hope for immigration reform from a reluctant Congress that has punted for years. History provides a wider perspective.

The legal battle over whom to allow entry into the United States cuts to the meaning of the nation and its place in the world. And at times the Constitution seems at odds with itself. Does the “supremacy clause” of Article VI trump the 10th Amendment? Our democratic institutions exist to test these questions and through fair process, hopefully create laws all can live with.

We hope no dispute will escalate to the level of tension seen in Boston in 1854.  And that no federal deportation force is dispatched to a “sanctuary city” where a crowd of people forcibly resists or shields someone from arrest in a way that leads to violence. There must be no blood in the streets of America.

But history stands as a reminder of the passions that can be stirred when a nation’s laws conflict with people’s beliefs about the meaning of justice.

Did this piece help you understand something in our history and connect it to the present?  If so, won’t you please share?