America First Is a False Dichotomy

In the World War Two film Darkest Hour, a phone call between Winston Churchill and President Roosevelt may have surprised you. With Britain on the brink of Nazi invasion, Churchill begged for American arms, ships, planes–anything to fight with. But FDR sadly explained that America could not help. US neutrality laws, passed by Congress in 1935 and 1937, prohibited arms sales to belligerents, or countries at war. Why would Congress refuse to help? Congress was putting America First.

Today’s questions: Why was that, and secondly, is it a good idea? I’m not here to give answers; I’m here to explain American history, but in some cases, history itself provides the answer. I believe this is one of those instances.

Let’s go back by one world war. At the outbreak of World War I in 1914, America was neutral. Not our fight, said the Americans. Let the monarchs of Europe slug it out for themselves. But the US was sucked into the vortex anyway. Some tales were false, such as German atrocities in Belgium. But German submarines sinking American ships and German battlefield victories caused the US to enter the war to, as President Woodrow Wilson put it: “make the world safe for democracy.”

After the war, the Nye Committee concluded America had been tricked into aiding Britain and the Allies. The new consensus in the Depression-era Congress was: America should not be dragged into another European brawl. Historians still debate this.

So as the beast of Nazism devoured western Europe in 1940, America was determined to stay out.

The first president, George Washington, bade his country farewell in 1797, advising posterity to avoid foreign alliances and entanglements. Put America first. Sage advice for his world but he did not foresee long-range bombers that can fly across oceans, let alone nukes.

The second world war wasn’t just another border squabble or family feud within the royals, which characterized WWI. It was an existential emergency where democracy, human rights and political freedom were about to be strangled. Isolationism, America First, was no longer possible. The fascists had awesome military might that could reach our shores.

In late 1941 the Pearl Harbor attack finally woke America up to the full nature of the emergency, and then the US hurled its full might into the defeat of global fascism.

Can America be the world’s 911 service?

Today, the Trump administration declares that it shall put America first,  echoing the sentiments of the original America First party, led by aviator Charles Lindbergh.  I understand the earnestness of those who say, “more money for our own military and less for the UN.”  The argument is that America provides too many allies with a free security umbrella. For example, the president claims America bears the full cost of shielding Japan, while in return Japan decimates America with unfair trade practices. (Go to the parking lot of your local community college on a Tuesday afternoon, and I’m guessing that the Japanese-made cars outnumber the American by a yuge margin.)  That America’s allies should do more for their own defense is a popular argument.

Yet there are still many things that only America can do. In many ways, it is still 1940. Existential threats still exist, in the form of radical jihadism and a nuclear-armed North Korea. Russia is a resurgent  hostile power in Europe, now fascist instead of communist. America is the sole power that can project naval and air power to any corner of the globe quickly. 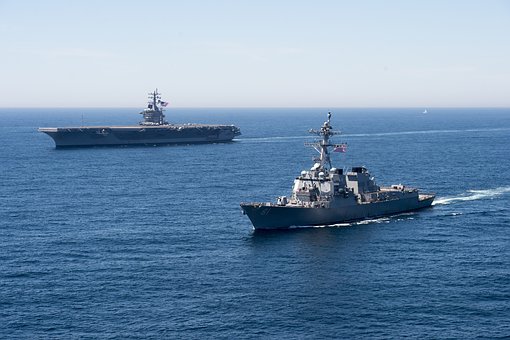 There are a few things things worth fighting for. Ben Franklin once observed that “there is no such thing as a good war nor a bad peace.” I agree, for the most part. Peace is the highest goal that humanity must have.

But still, if the price of peace is the perpetuation of some monstrous injustice–such as the gas chambers of Auschwitz–then peace is not worth it. There is no peace nor compromise with the demon of Nazism. Compromise is impossible with the Japanese militarists that perpetrated the Rape of Nanking. There is no compromise with southern slaveholders. If the price of the America’s existence in 1860 was the perpetuation of slavery, human beings for sale like fruit on a fruit stand, then civil war was morally justified.

To the History Dr, it is not an “either/or” proposition, as I discuss in a video. As Facebook says, “it’s complicated.” America can be both a good citizen of the world and protect its national interests. These competing goals can co-exist. America can:

America need not torch its bonds with other countries. With power comes responsibility. America is the world’s only superpower. If America retreats from its global responsibilities, if America steps back, countries less committed to human rights will step in to fill the void. Looking at you, China. Regional hegemonies will expand too, such as Iran or Saudi Arabia.

If America put itself “first” in 1945 and withdrew from Europe and the Pacific, Soviet power–Stalinism–would’ve filled the void.  America First is short term thinking. The Marshall Plan, funding European reconstruction, was not a gift to freeloaders; it was an investment. It did more than nearly any other policy to create long-term security for America.

The same equation persists. Cooperation is the best path for the American and human future. America must not abandon good for the sake of short term gold. A peaceful and prosperous world is still the best path to long-term American security and prosperity.

If this post helped you understand the importance of history in making present-day decisions, please share it with friends.