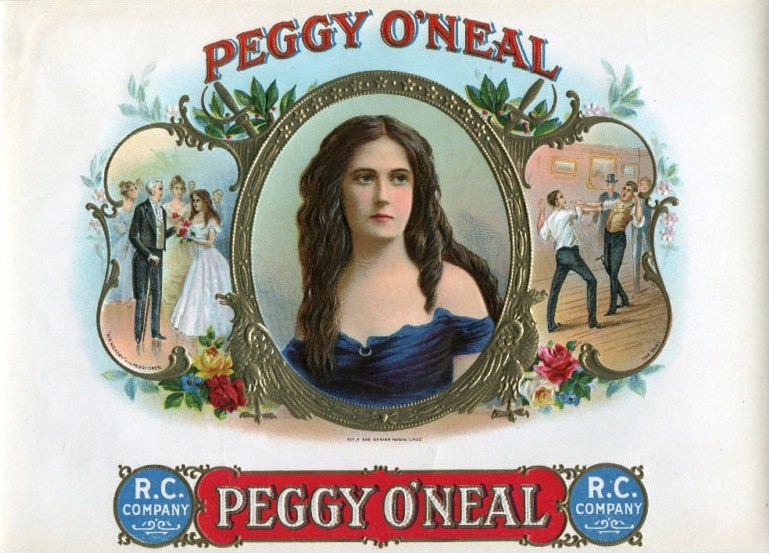 It’s a story many of us know all too well. Someone is slandered behind their back. Excluded from social gatherings. Gossiped about. And then they fight back. The consequences get political.

No, we’re not talking about today’s sexual harassment scandals. Peggy O’Neal lived in Andrew Jackson’s time. Jackson emphatically took the side of the common person, a woman looked down upon by her social betters. Donald Trump has compared himself to the populist Jackson more than once. The result was a mutiny in his cabinet, ending in multiple resignations.

The girl from the other side of the tracks

Margaret O’Neal was born in 1799, the flirtatious daughter of the owner of the popular Franklin Hotel, a staple of the DC social circuit in the early 1800s. Margaret gained an informal education and became socially outspoken, even brazen, with “street smarts.” She played the piano, and sang and danced seductively in the hotel’s bar room. Peggy attracted many suitors.

At only 17, she married John Timberlake, a US navy quartermaster whose missions would dispatch him for years at a time. You can surmise the result. While Timberlake was away in 1828 and she was running her late father’s hotel, Peggy got pregnant–incontrovertible proof of adultery—but miscarried. Her husband died at sea, in accounts varying from suicide over the affair to illness to natural causes.

Peggy then married John Eaton, before the expected one year of mourning had expired. Eaton was a rising star in the new Jackson administration. In 1829, Easton was appointed to the cabinet as Jackson’s Secretary of War, what we call now the Secretary of Defense. Upon his elevation to the cabinet, the Eatons became a Washington glamour couple.

At the time, the cabinet had expanded to seven posts from the cabinet in Washington’s time which had only five official members–Secretaries of State, Treasury, War, the Attorney General and the Postmaster General. Today there are 15 positions, not counting the vice president, with 20th century newbies such as the Secretary of Education, Transportation, Energy and Health and Human Services.

That small cabinet was about to be roiled.

When ugly rumors about Peggy Eaton came to the attention of the other cabinet wives, they skipped her parties. The Washington elite, call it the “anti-Peggy coalition,” disdained her as a woman of “loose morals.”

And Vice President John C. Calhoun’s own wife Floride, the queen bee, refused even to acknowledge Peggy. FloCal returned to South Carolina rather than associate with the hussy. Outspoken as ever, Peggy complained to anyone who would listen about her shoddy treatment.

For Andrew Jackson, this shunning of Peggy Eaton by the Washington social elite rankled his populist bones. Equating the attacks to similar innuendo against his own late wife, Rachel, he summoned the entire cabinet to harangue them about their wives’ treatment of Peggy Eaton. He demanded that they compel their wives to accept Peggy socially, but the cabinet men defended their wives anyway! Can you imagine what the minutes of that meeting would look like?

As the “Petticoat Affair” intensified, John Calhoun soon resigned as Jackson’s VP, in part over the Peggy Eaton Affair. And the rest of the cabinet was reshuffled. Jackson began to ignore his official cabinet. He relied more on the advice of his informal “kitchen cabinet.”  With Calhoun out, Martin Van Buren was elevated to the ticket in 1832 and went on himself to become president. Calhoun’s dream of being president was now in shambles. To be fair, his pro-secession views didn’t help him either with Jackson. Pretty severe political consequences for the nation and for John C. Calhoun.

We might recognize this story in today’s times, though of course our lexicon is different. Peggy Eaton wasn’t around for social media, but I’m pretty sure she would recognize the term “slut shaming.” Populists might recognize–and applaud–attacks on the “Washington elite” as waged by Jackson. The genesis of a women’s rights movement may be found in the defenders of Peggy Eaton. Feminists might point out that it took more than one person to create that illegitimate pregnancy.

People don’t change much in 200 years

Cabinet infighting, even at such a petty and superficial level, matters. As we picture John Eaton chivalrously coming to his wife’s defense, we can also imagine a reverse yet parallel scenario today: Treasury Secretary Stephen Mnuchin defending his wife’s bad behavior on Twitter. (It’s reversed because nobody would accuse Mnuchin’s wife of being a populist.) Social exclusion is a painful subject. Many students experience being shunned, bullied or excluded. The toll it takes can be severe. What teenager doesn’t know who the “queen bees” of the high school hallways are?

After the Peggy Eaton affair, some politicians had their fortunes made, like Martin Van Buren, while others were demoted, such as John Calhoun. Cabinet re-shuffling is still common, based on power plays and personality clashes. In politics, reputations can be won and lost overnight, and can be difficult to restore.

So whatever happened to the Eatons? Exhausted by the constant turmoil of Washington, John Eaton was posted to Spain as a diplomat where he and his wife attempted to live in obscurity but she was known there as well.

If you found this story of American history to be interesting, won’t you please share? We hope you’ll subscribe to the blog too.